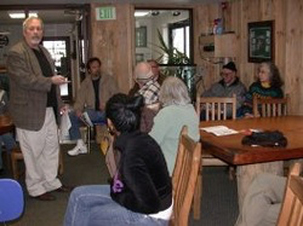 As CEPA/Friends of Wolf Lake, AWLI sponsored the successful Bi-State Gatherings on Wolf Lake in 2000 and 2001, financed from local fund-raising efforts and donation of services from various entities. The Gatherings developed the Wolf Lake Vision document.  In mid-2001, the collaboration evolved into a working consortium and became the Association for the Wolf Lake Initiative.  The Legacy Foundation of Lake County, Indiana, became its fiscal agent. In early May 2001, AWLI conducted the initial Wolf Lake Bi-state Wetlands Festival and Fund-raising Dinner. Funds raised were used to establish an endowment fund for Wolf Lake. AWLI sponsored the Winter Wonderland at Wolf Lake Festivals in January 2002, planned by the WWW.COMmittee, a group of local agencies and organizations. The advisory committee to Wolf Lake managers, as recommended in the Wolf Lake Vision Document, held its initial meeting in March 2002.  Known as the Wolf Lake Vision Implementation Committee, the group met on a monthly basis through February 2005, when these implementation efforts were shifted to AWLI’s Board of Directors.

AWLI held a retreat in May 2003 at which it confirmed its major goal as convening bi-state meetings of government agencies and officials, business and industry and local educational, civic and environmental groups and individuals in support of its mission.  To promote Wolf Lake and surrounding natural areas and to advocate for improvements became its other goals.  Retreat participants recommended that AWLI incorporate as a not-for-profit organization and land trust. In late June the membership drive was launched with the assistance of Congressmen Jesse Jackson Jr. and Pete Visclosky. A founding board of directors was selected in September with officers who served as its executive committee. The membership elected the Board and selected Michael Boos as Executive Director in early January 2004. In early February, the IRS awarded AWLI its 501(c)(3) status as a not-for-profit organization and land trust.